After a couple of quiet weeks at the end of July and into August, both Tom and Alice were in action at the North Berks MCC Supertrial.

The Supertrial event held by North Berks MCC has been running for many years and has established it’s self as a brilliant weekend for riders and spectators. Taking on the alternative ruling of stop allowed it give the riders a chance to attempt larger and more tricky sections, by letting them stop (with feet up) and psych themselves up before hitting the obstacle hard!

On Saturday 18th August Alice was up first, riding the supporting B route alongside the Womens Championship and Youth Boys class, Alice would be riding against competitors older and on larger capacity bikes. The advantage for them would be that the extra power in bike and body helping them to get over the steps/rocks in front of them.

As always Alice put in a very solid performance, disappointed with her first lap after dropping a 5 towards the end of the lap. Her total of 9 marks lost put her in first position but only by one mark. After being annoyed by the 5 mark penalty the aim was to improve for the second lap and Alice was able to complete the lap with just 3 more marks dropped. A total for the trial of 12 marks and increasing the gap to second place who finished with a total of 23.

On Sunday the Ladies ACU Championship had their penultimate round held by Bexleyheath & DMCC. After taking the championship lead by 3 point at the previous round in the Isle of Man it was a good chance to extend and possibly win the Championship.

Alice rode without normal minder/dad Will, who was minding for Tom in North Berks. Continuing her momentum from the previous day Alice rode the same sections as the intermediate class and with a total score of 51 this would have put her at the top of this class too, again against riders older and on larger capacity machinery.

With Alice finishing the trial and claiming 20 points in the championship this makes her the ACU A-class Youth Ladies & Girls British Champion. Not quite the way you want to win the championship but after missing the championship crown in the past couple of years due to injury she was happy to make it through unscathed.

Whilst Alice was in Bexleyheath, Tom was at the North Berks Supertrial. This trial attracts the best riders in Britain and even some travelling from Spain and Australia! The event format is a qualifying round in morning followed by a semi-final and final.

With the entry filled with previous and current World Trial Championship competitors and winners the riding level is very high. Tom was one of the first riders to tackle the sections and with this added pressure of others riders watching he put in rides that gained applause from the crowd and following riders.

With a good first lap Tom struggled a more in the second lap as the heat and exhaustion started to take affect. Finishing the qualifying round in 12th position Tom wouldn’t progress but the experience and the performances put in would help Tom as he heads into the final rounds of the British Championship and the infamous Scott Trial.

A good weekend for both Minta’s before a couple more quiet weekends in the Championships before the final rounds and special Nations in September and October. 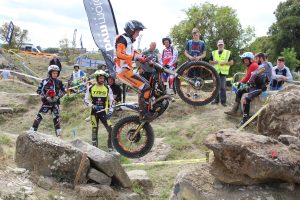 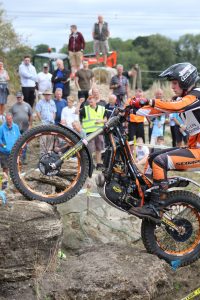 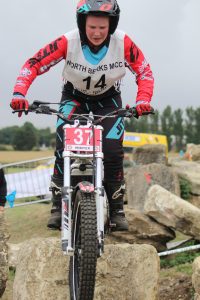 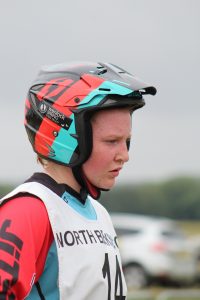 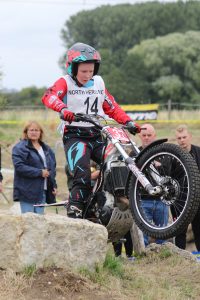