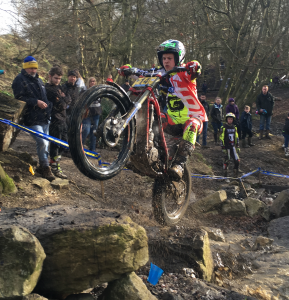 On Saturday 4th March Hook Wood Club held the first round of the ACU British Trials Championship for 2017.

After winning the Expert class in 2016 Tom made the move up to the Championship class.

The trial was a difficult one with many of the championship class dropping fives around the first lap. Tom was going well holding his own and putting in several inspired riders. When riding through the last part of Section 11 Tom’s rear tyre came off the rim meaning he needed to return to the pits before continuing with section 12. With a time limit on the first lap and with this problem Tom incurred 10 penalty marks after going 10 minutes over the time limit for the lap.

Lap 2 and 3 were better, the total for these two laps combined was 1 mark behind his first lap.

Having not had the penalty marks and a better first lap Tom’s finishing position would have been much different to the 14th he finished. There was plenty of positives to take from the day, although at the time Tom was disappointed with his performance on the day.

Tom is missing the next round to make his regular trip to ride in the Santigosa Three Day Trial and mix it with the Spanish riders.

Alice begins her 2017 season on 12th March at Seymour’s Arena when North Berks host the opening round of the ACU Ladies and Girls Championship.